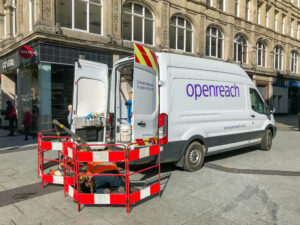 Openreach is to limit its investment in the rollout of ultrafast fibre broadband as BT pushes forward with an intense cost-cutting scheme.

The telecom giant’s networking division has contacted suppliers to say it would build the network “narrower and deeper” and tighten timeframes, according to a letter seen by the Financial Times.

“This will by necessity include an element of cancellation or suspension of a job you have received and/or validated”, the letter said. “It is clear that there will be a financial impact to you as we implement these plans.”

It comes after the FTSE 100 firm announced a fresh cost-cutting target from £2.5bn to £3bn by the end of 2025 as a result of inflationary pressure.

Chief executive Philip Jansen said that whilst he backed the current push for efficiency, the firm needed to take “additional action on our costs to maintain the cash flow needed to support our network investments.”

Boris Johnson’s government promised to “level up” the nation by providing next-generation-speed broadband to most homes by 2025, hoping to address gaps in rural areas.

The decision to limit expansion plans could work in the favour of major rivals like Virgin Media O2, who may be able to capitalise on a BT slowdown.

A spokesperson for Openreach said: “We expect to build ultrafast full fibre broadband to more homes and businesses next year, not fewer, so we’re speeding up not slowing down.

“As our recent results show, we’re investing £200m more than we expected to this year on the build, and orders for Full Fibre services are at record levels. In fact, nine million homes and businesses can already order our Full Fibre service from a large range of service providers, so it makes sense for us to put more resources into upgrading customers and fulfilling orders as quickly and smoothly as possible.

We’ve also partially built the new network to a further six million premises, so we’re focussed on completing that work.”