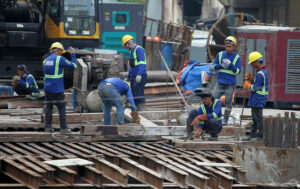 by
Workers are seen in a construction site in Manila. — PHILIPPINE STAR/RUSSELL PALMA

“Despite the ‘Build, Build, Build’ program launched in 2017, the Philippines still faces sizeable investment needs for both traditional infrastructures, such as transportation and utility, and new infrastructures for digitalization and climate change mitigation/adaption,” he said in an e-mail.

The Philippine government plans to spend at least 5-6% of gross domestic product (GDP) on infrastructure.

Based on the latest Development Budget Coordination Committee (DBCC) report, the government plans to allocate P1.248 trillion for infrastructure this year, up by 4.1% from the P1.199-trillion program for 2022. The Department of Budget and Management (DBM) has yet to finalize this year’s infrastructure program.

In an analytical note “Public Infrastructure Investment and Macroeconomic Impact in ASEAN+3 economies,” AMRO said the fiscal multipliers and long-term effects of public investment “may be higher during the recession and under high uncertainties.”

Higher public infrastructure investments may increase the debt-to-gross domestic product (GDP) ratio in the first year, but will eventually reduce it in the medium term as the economy grows and raises fiscal revenues, it added.

“In Japan, Korea, the Philippines, and Cambodia, the debt-to-GDP ratio declines substantially in the medium term, compared to the baseline, mainly due to high revenue buoyancy,” AMRO said.

Mr. Nam noted that the extent of the debt-to-GDP ratio’s decline would depend on the “efficiency of investments in promoting growth and the responsiveness of revenue to growth.”

As of end-November, the National Government’s outstanding debt hit a record P13.644 trillion.

In its study, AMRO noted that narrowed fiscal space during the pandemic may prevent governments from hiking infrastructure spending.

“Due to the revenue shortfalls and massive healthcare/stimulus spending during the pandemic, the public debt-to-GDP ratios in all member economies have increased substantially, raising concerns about debt sustainability. As a result, the authorities are leaning toward restoring their fiscal buffers in the medium term, notwithstanding the need for continuing economic recovery support,” it added.

In 2020, the Philippines, Singapore, and Brunei governments reduced public capital expenditures, as they reallocated funds to healthcare and support for pandemic-hit businesses, but restored capital spending in 2021.

“For investment efficiency, the authorities should pay more attention to choosing projects based on rigorous cost-benefit analysis; monitoring and reviewing the implementation of projects to address the potential risks and issues preemptively; and improving the coordination and cooperation among public and private stakeholders,” he said.

“In addition, encouraging the public-private partnership (PPP) with a well-designed legal or institutional framework would mitigate the government’s financing burden while inviting the efficiency of the private sector. Financing sources would also be available from China’s Belt and Road Initiative (BRI) that has been encouraging infrastructure investments in the region,” he added.

The government last year revised the implementing rules and regulations (IRR) for the Build-Operate-Transfer (BOT) Law, which it hopes will attract more private sector investment in infrastructure.

“For emerging and underdeveloped areas, it will be the government’s sole burden to fund infrastructure which can improve the economy in various localities. As such, government-funded infrastructure in emerging areas should be encouraged, as it can create new industries and jobs, and improve efficiencies,” Mr. Ridon said in an e-mail.

“This will consequently lead to higher incomes and broader economic activity in previously economically stagnant regions, and contribute to a better management of government debt,” he added.

“Ultimately, the Marcos government will have to decide whether to take on more debt to fund its infrastructure program or grant significant incentives to the private sector to engage in PPPs despite threats of recession, rising interest rates and other uncertainties,” he added.

Antonio A. Ligon, a law and business professor at De La Salle University, said it is uncertain whether the government can maintain a sustainable debt level while raising investments in infrastructure “due to the unclear roadmap of economic programs of the government.”