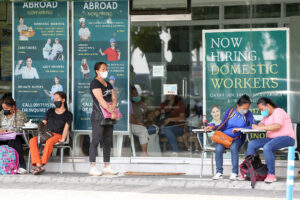 by
APPLICANTS wait outside an employment agency in Manila on June 08, 2022. — PHILIPPINE STAR/ KRIZ JOHN ROSALES

GOVERNMENT OFFICIALS proposed the inclusion of representatives from overseas Filipino workers (OFW) groups and the education sector in a planned interagency body for the country’s employment recovery plan following the coronavirus pandemic.

Migrant Workers Secretary Susan V. Ople, in an economic affairs hearing at the Senate on Tuesday, said Senate Bill 129 should include representation for overseas labor organizations under the Inter-Agency Council (IAC) for Jobs and Investments.

The bill contains a national employment recovery strategy (NERS) that will be drafted by the IAC.

Ms. Ople said that the agency should also tap as partners overseas workers groups “since they are also a source of investment.”

Ms. Ople also suggested that the IAC be mandated to “include the review of global employment and economic trends,” noting as an example Europe’s increasing interest in the Philippines due to the western region’s aging population.

The council, she added, should harmonize the employment, livelihood and training projects and programs of the national government in tandem with the private sector, “since most of the time, information also comes from the private sector.”

“Thus, developing or updating the NEAP has to be done in line with the PDP, which is basically done every six years and updated every three years,” he said.

He also suggested that other social protection schemes and the financial literacy program be included in the bill, not just social security benefits.

The functions of the IAC, he added, must not overlap or duplicate with the interagency investment promotion coordinating committee.

Finance Undersecretary Cielo D. Magno noted their support for the bill, especially the goal to unlock opportunities for micro, small and medium enterprises (MSMEs) and its intent to address issues of unemployment, underemployment, and the rising informality of work arrangements.

“We also recognize the important role of this interagency committee that the bill is proposing to create to address the need for additional trainings, transfer of technology, upskilling, reskilling, apprenticeship, and on-the-job training needs of our workers,” she said.

The Finance department also pitched for the bill to “mandate the interagency committee to review all the incentives given to MSMEs and harmonize it with the intent of the bill, particularly in incentivizing upskilling and training of workers.”

Social Welfare and Development Secretary Elaine F. Fallarcuna suggested that out of school youth, those in the informal sector, and graduates of Grade 12 be prioritized in the provision of skills training.

Ms. Fallarcuna also said that the bill should be more inclusive, noting that the need to consider young persons with disabilities and indigenous people. — Alyssa Nicole O. Tan