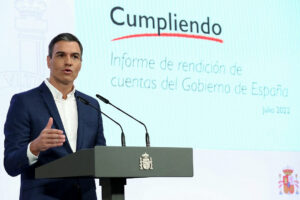 “I’d like you all to note that I am not wearing a tie,” Mr. Sanchez told a news conference. “This means we can all save from an energy point of view.”

High summer temperatures are straining Europe’s power systems and raising concern about the prospects for a regional drive to save more gas in case the war in Ukraine prompts further reductions in supplies from Russia.

For now, he said: “I have asked ministers, all public officials, and I would like to ask the private sector too, if they haven’t already done so, not to wear a tie when it isn’t necessary because that way we will be confronting the energy saving that is so important in our country.” — Reuters