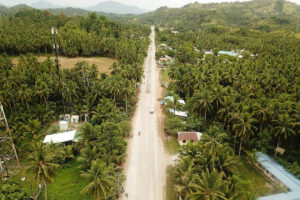 by
ONE of the recently completed road projects in Zamboanga City. — DPWH

THE DEPARTMENT of Public Works and Highways (DPWH) announced on Monday the completion of projects in four provinces, including infrastructure aimed at providing better access to social services and economic activities.

The department completed a 3.36-kilometer road network of Basa Air Base in Floridablanca, Pampanga, which will ease the transport of military equipment and supplies in and out of the air base.

“The improvement of the road network inside Basa Air Base is expected to uplift the living standards of residents of the base while boosting tourism-related activities within and around the area,” it said in a statement.

“When it rains, the soil erodes and covers the road, rendering one out of four lanes unpassable. With the completion of this P49.2-million project, motorists are now safe from landslides and the road section is now accessible to all types of vehicles even during heavy rains,” the department said.

In Zamboanga, three new infrastructure projects have been completed. Among them is the reconstruction of a 1.7-kilometer portion of the national road in Barangay Tictapul.

“The rehabilitation of Pagadian-Zamboanga City Road will support ecotourism and agribusiness in the city which will play significant role in our economic recovery from the effects of the pandemic,” DPWH said.

“Uniformed personnel stationed at Camp Arturo Enrile in the Municipality of Malagutay are the recipient of the new administration office,” the department said.

Another project completed in Zamboanga is the Sitio Centro to Sitio Tigui farm-to-market road in Barangay Limaong.

For Pangasinan, the department reported the completion of the P66.58-million flood mitigation structure along the Aloleng Section of Balingcaguing River in Barangay Aloleng, Agno.

“Since Agno is a coastal municipality and an emerging tourist destination, we really need to fast-track river protection structures before the rainy season to prevent inundation and damages to crops and properties,” DPWH Region 1 Director Ronnel M. Tan said. — Arjay L. Balinbin