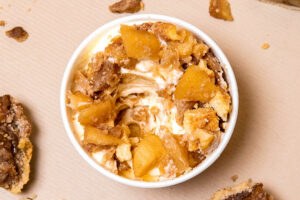 SHAKE SHACK has teamed up with Tilde Bakery & Kitchen to bring together the best of both dessert worlds — Shake Shack’s frozen custard and Tilde’s handcrafted French Apple Pie — to create the Apple Pie Oh My Concrete. It is now available in all Shacks for dine in and takeaway in Single or Double sizes (meant for sharing), but only until Feb. 5. It features Shake Shack’s vanilla frozen custard blended with Tilde’s French Apple Pie. A community bakery located in Kapitolyo, Pasig, Tilde Bakery & Kitchen was started by childhood friends Ginny Roces de Guzman (former founder of Sugarhouse) and Chiqui Lara who wanted to create one of a kind cakes and pies. Made everything in-house daily, Tilde’s handcrafted baked creations highlight the use of locally sourced ingredients and skills of their bakers, most of who have been with them since they started out as a small café in the back streets of Poblacion, Makati. Shake Shack is committed to supporting its local communities and sourcing real, premium ingredients. The concrete’s frozen custard is made with real sugar, no corn syrup, and milk from dairy farmers who pledge never to use artificial growth hormones. A treat for a cause, 5% of sales from any Pie Oh My concrete support CENTEX, Ayala Foundation’s holistic education program that promotes student, parent, and teacher development from underserved Filipino communities.

GREEN Rebel is a Southeast Asian start-up offering a wide range of plant-based products based on Asian cuisines to appeal to the palette of Southeast Asia and the wider Asia region. Green Rebel has made headlines in the past two years for its proprietary technology that is able to create whole-cut plant-based beef and chicken with a fibrous texture and “meaty” bite, including introducing the first whole-cut steak in Asia back in June 2021. Some of their signature products include the Indonesian household favorite, rendang — in the form of the Green Rebel Beefless Rendang. There’s also a Japanese breaded classic, Green Rebel Chick’n Katsu, and Asia’s first whole-cut plant-based steak, the Green Rebel Beefless Steak. When asked about Green Rebel’s price points and how they expect to compete with other plant-based restaurants established in the Philippines, Helga Angelina Tjahjadi, the co-founder of Green Rebel, said: “As a whole, we are a category of product that is currently still more expensive than traditional animal protein. With that said, we (Green Rebel) are on a mission to make plant-based protein more accessible through a lower price point to the general public, doing so as we continuously move towards economies of scale and development of new technologies.” To cater to Filipinos, Green Rebel has partnered with Vegore and Mayani, a local E-commerce platform with the goal of providing tasty, affordable, and healthy products to the Philippines and beyond. Other than being available in Mayani and Vegore apps, Green Rebel is expected to officially enter the Philippine market this February via partnerships with food services and supermarkets. Check out Green Rebel’s meat-free products at their official website.

MANG Inasal now treats its customers with Snack Savers. “Mang Inasal has been a dining partner of our customers for two decades and we know how important merienda meals are for them. So this year, we are offering everyone our Snack Savers composed of our best-selling snacks at affordable prices,” said Mang Inasal’s Business Unit Head Mike V. Castro. Customers can choose from Chicken Empanada at P52, Palabok at P75, or small Extra Creamy Halo-Halo at P69 anytime of the day. The Snack Savers are available at all Mang Inasal stores nationwide.