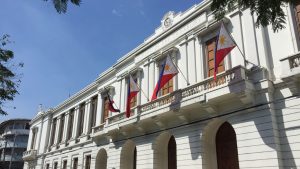 The National Government’s (NG) outstanding debt rose to a record-high P12.79 trillion at the end of June, beating the previous high of P12.76 trillion in April.

Preliminary data from the Bureau of the Treasury (BTr) showed outstanding debt inched up by 2.4% from end-May’s P12.49 trillion “due to the net issuances of domestic and external loans as well as currency adjustments.”

The BTr said the debt pile has risen by 9.1% since the year started, after the government borrowed P1.06 trillion more.

Of the outstanding debt, the bulk or 68.5% was obtained domestically, while the rest was from foreign creditors.

As of end-June, outstanding local borrowings reached P8.77 trillion, higher than the P8.67 trillion logged in May.

The BTr attributed the increase to the P96.3 billion it borrowed through government securities, as well as the P5.36 billion impact of peso depreciation against the dollar.

Most of the domestic debt stock still came from government securities with P8.77 trillion in June, up 18.5% year on year, and 1.2% month on month.

Broken down, it consisted of P1.8 trillion in foreign loans and P2.23 trillion in global bonds.

“The increment in external debt was attributed to the impact of local currency depreciation against the USD amounting to P186.94 billion and the net availment of external financing amounting to P43.18 billion; offsetting the P35.72 billion effect of net depreciation against the US dollar on third-currency denominated obligations,” the Treasury said.

This was attributed to P9.34 billion in net availment of domestic guarantees and the impact of local currency depreciation amounting to P10.44 billion.

“These offset the effect of third-currency fluctuations amounting to P4.60 billion and net repayments on external guarantees amounting to P0.97 billion,” the BTr said.

The government borrows from local and external sources to help fund a budget deficit capped at P1.65 trillion this year, equivalent to 7.6% of gross domestic product.