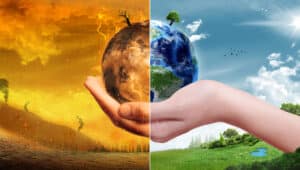 Global warming, exhaustion of hydrocarbon endowment, alarming volumes of industrial and domestic waste, the all-pervading plastic: environmental problems have long been nudging humankind to extreme measures to try to stop the destruction of our habitat.

Systematic activities to protect the environment have begun a very long time ago and by this century have become planet-wide. States make agreements and impose self-limitations, entrepreneurs are forced to comply, recycle and pay. Citizens… the citizens’ share for now is just propaganda: large-scale, impressive, but not effective enough. Economist and mathematician Stanislav Stan Yurchenko is sure that it won’t last long.

“However significant the role of government programs and enforced business initiatives may be, the preservation of the planet is patently doomed to failure without personal involvement,” believes Stan Yurchenko. “Understandings have been reached and methods developed at the government and corporate levels. The end-user for now is happy in the role of a sympathetic, yet still, audience.” According to Stan Yurchenko, today’s efforts of the government to involve citizens in an effort to counter pollution are not effective enough and very soon impersonal mass propaganda must be replaced by more effective measures. “We know since schooldays that we should respect the environment, that smoking in the forest is prohibited; that we shouldn’t litter; and that we have to turn off machinery. We all agree to it, we don’t need it repeated,” says Stan Yurchenko. “Only, this is an agreement in principle and the knowledge is theoretical. We don’t remember it in our day-to-day lives.” Stan Yurchenko estimates that 95% of population understands the problem, but only 5% takes specific actions.

Stan Yurchenko sees the way out of the situation in “personalization of environmental liability,” something similar to what happened in manufacturing and entrepreneurship a long time ago. “Every end-user of planet resources, as singular as they may be, still acts within the framework of the economy,” says the analyst. “And all of the economy is countable. It is not difficult at all these days to keep track of how many groceries you bought and what part of them is trashed, how many kilowatt-hours of power you used, how much gas your car burned and how much CO2 and kilocalories it produced for the atmosphere. Even the food you eat is very simple to re-calculate into energy produced.”

A logical and, moreover, very probable next step is the personal accounting of each person’s contribution to planetary pollution. “We’ve been trying to make the manufacturers responsible for disposal of their product once it loses its commercial value,” says Stan Yurchenko. “There is nothing to prevent it technically. Why not go a step further?”

According to Stan Yurchenko, it is more than likely that in the next few years people will be induced to consume responsibly more personally. “It is not likely that we’ll go as far as environmental consumption tax for individuals. However, simply being informed, simply knowing the graphic and specific number of our everyday contribution to destruction of the planet may be enough for abstract propaganda to suddenly become specific knowledge,” believes Stan Yurchenko. “After all, we really like ourselves in numbers. We calculate the miles we walk a day, the calories we eat and the money we spend. I think that an application called ‘How much harm have I done Earth today’ will be very popular. Especially, if you can post the results in social media.”

Stanislav Vladimirovich Yurchenko (Stan Yurchenko) is an economist, mathematician and expert in complex digital systems, a graduate of the Moscow Institute of Physics and Technology. At various times Stan Yurchenko headed the creation of large informational complexes: for the Central Agency of Air Service of Russia, for the Government of Moscow, etc. He is the Vice President of the Russian Academy of Business and Entrepreneurship.

Special purpose acquisition companies fall out of favour with investors

When Will Johnson & Johnson’s Vaccine Profits Start to Roll In?

Enter Your Information Below To Receive Latest News And Articles
Your information is secure and your privacy is protected. By opting in you agree to receive emails from us. Remember that you can opt-out any time, we hate spam too!